The Ministry of Human Resource Development (MHRD) released its draft of the national education policy which aims to develop a system of education which is for all.

But this draft policy has nothing for students with special challenges.

A lot of issues with regard to persons with special challenges are in fact left unheard and unaddressed in the national education policy. I would appreciate the move of the government on emphasizing upon a universal sign language for people who are hard of hearing — but it doesn’t talk anywhere about the training aspect of the teachers who would be teaching in public and private institutions to students with challenges. Learning to read: The National Education Policy says books for visually impaired persons must be in an accessible format. (Photo: Reuters)

The draft of the National Education Policy (chapter 6) talks about the fact that books made for the visually impaired should be in an accessible format, which talks of Braille and large print. However, if we take this into consideration, how will the teachers understand what a visually impaired child has written in Braille? It again brings us back to the need for information and technology — which has been neglected by the government to its entirety.

No emphasis on the training of persons with challenges with regard to using computers and special applications designed for them has been made, which should be an integral part of the curriculum. No emphasis has been given on how the training of persons with disabilities would take place in the special schools as these special schools prepare children for an integrated school.

Rather, an interlinking between the special schools and the integrated school, whether public or private, should be drawn by setting up a curriculum for these special schools, so that the child is prepared according to the needs of the integrated school from early childhood. Examinations are an important part of one’s academic life. Once anybody appears in the exam, only then is it even tested whether the purpose of educating the child has been fulfilled. 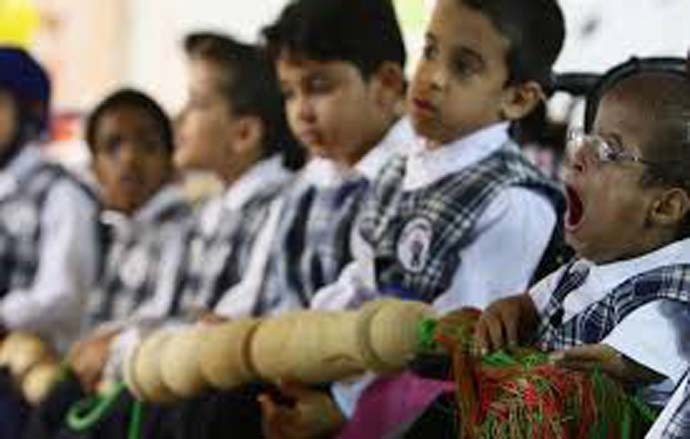 Where are the links? The draft policy makes no provisions on how students with special needs will even sit in their examinations. (Photo: Reuters)

In the draft of the national education policy, there has been no reflection on the fact that how would students having any special challenges be appearing in their examination? The students having a visual disability, locomotor disabilities, slow learning disabilities and many others use scribes for appearing in the examination. The criteria of ‘scribe’ are often interpreted by the examination centre which leads to a double burden at the time of examination for a person with a challenge. The centres at times often reject providing the scribe and at times, the scribe that they provide is incompetent. Although the person with a challenge has a choice of bringing his/her own scribe, then, the centres set criteria which are often decided by them.

I would say the centres should make the invigilation system more strict and should stop any malpractice if committed by the student then and there. Why force a student to bring a scribe as per the centre’s choice?

The education policy can also prescribe an organisation or a particular wing of the Rashtriya Shiksha Ayog, proposed to be made by the new policy, which would deal with the examination for persons with challenges, which would be looking after the arrangement of competent scribes for writing the exams to any grievance that the person with a challenge has with regard to the questions in an examination or any other problem that he or she suffers from. So many materials. But how do we take the exam? (Photo: Reuters)

In the national education policy, there has been an emphasis on providing worksheets, assignments and extra books to students — however, it is nowhere mentioned that these should be in an accessible form. The provision of libraries has been talked about, but the accessible format of books is nowhere mentioned. The families of the children with special needs should also be provided training programmes or workshops in which they can learn how to deal with the children at home so that at school, the child can perform at an equal level with other students.

It is mentioned in the national education policy that the reference to persons with challenges should be made so that the students can learn from them. Certainly, a reference is important — but steps towards inclusion gain more significance because the students who are studying today would be the leaders for tomorrow. A lacuna in the draft of the national education policy also exists with regard to preparing students for competitive examinations which are again left wholly on the coaching institutes.

Rather, the curriculum should be such which serves the purpose of making students ready for the competitive examination in the classroom of the school itself.

In the end, I would say that the accessibility for persons with special challenges has again stuck to washrooms and ramps.

What is required is an inclusion of all in education itself.

"Get all latest content delivered straight to your inbox."
[mc4wp_form id="36"]